There's David Morales Colón, sitting on the Honda his uncle gave him, down in Puerto Rico. 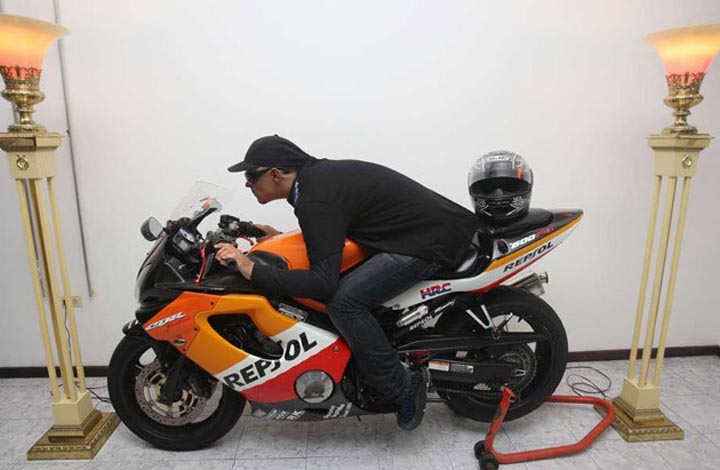 Quote:
I wonder who shot him and why?

What I find interesting is the position of his left ankle.

So, I wonder what position Larry Craig will be posed in at his funeral?

What's flipping amazing is he was shot at 27 times with the very potent 40cal pistol. He was hit with 19 rounds.

He was talking to a 14 year old girl who caught two of the rounds with her legs.

The corpse looks good for that much trauma with that weapon.

Maybe his muffler was too loud.

Trilby  Thursday Apr 29 07:52 AM
Quote:
then it was justifiable homicide.

Sheldonrs  Thursday Apr 29 09:31 AM
Quote:
There's a dead guy on a motorcycle and it's his ANKLE you find interesting?!!!

His baseball hat appears to be nailed to the back of his neck. And his shirt tail looks like it's nailed to the bike seat. Maybe that helps keep him from falling off?

It's creepy to me that his hat seems to be tucked into the collar of his shirt. Makes me wonder if that's to hold some "bits" in.

jinx  Thursday Apr 29 12:03 PM
Quote:
Yeah there's gotta be some kind of support going up his back to hold him up.

Will they bury the motorcycle, too?

Ironically, I have to attend a viewing tonight and the funeral tomorrow (my wife's aunt). Somehow, I don't expect anything quite like this....

glatt  Thursday Apr 29 12:55 PM
Quote:
It almost looks like there might be a rope tied to the back of his hat, hidden under his collar, and the hat is stapled to his forehead to keep his head pulled up and back.

Impressive work there, whatever it is.

Maybe they drained all his fluids and filled him with cement?

Open caskets are tough enough to handle sometimes, but this is seriously creepy.
If he had been a jockey, would they have shot his horse for the display?
And what if he had been a contortionist? Gahh!

I thought this thread might have been about Jose Mourinho last night.

Wow, that is pretty creepy.. and interesting of course.

It's like he's stuck in time.. speeding along the golden highway.

Yup, looks like a board bolted to the bike, runs up his back and nailed to the back of his head. Elbows nailed to his knees, and hands glued to the handlebars. Hope he doesn't get a cramp.

How bout this from the link in the article....

Gravdigr  Thursday Apr 29 06:35 PM
Quote:
At least I have my favorite clothes.

Gravdigr  Thursday Apr 29 06:37 PM
Quote:
Save money on the casket? Put him in one of those baskets snake charmers use?

Viewings. Ugh. So not British. But I might be tempted if they were all done like that.

What? They don't do wakes?

A year or so ago they took my youngest niece (almost 4 at the time) to a visitation. After, someone asked her about it (you know, bringing it up so if she had any questions, etc.)

She shrugged and said "We got there and the guy was already dead!"

monster  Friday Apr 30 08:56 AM
Quote:
I think the Irish are a little more into it, but generally, the undertaker comes and gets the corpse. Close relatives may go and see the body at the funeral home if they desire (private appt) but it's not an expectation and there are no "visiting hours" where mourners receive guests and an open casket is on display (which is what I understand happens here but haven't actually been to one).

Then they hold the funeral -closed casket- dispose of the body (usually cremation) and then all round to the deceased's house or Auntie Mary's for sandwiches and booze and family arguments.

OK, thanks. I didn't realize they don't do the happy hour before the Bon Voyage.

Anyone else think about Against a Dark Background here?
Occurred to me after I logged off last night.

Second what Mons said.
I've never been to an open casket funeral, although they are sometimes shown on tv/ films as tear-jerking opportunities.
Also cremation is really popular here. I understand that the body is not prepared in the same way for a cremation. I might be wrong there, as Nanny was cremated and we went to see her in the Chapel of Rest on the same morning. No blue spots that I could see.

And and as a further point, British Irish (in my experience) hold the wake AFTER the funeral and without the body in the house these days. It's still a mighty old piss-up, but everyone is sober for the funeral. Given the length of a funeral Mass that's pretty useful.

I was the only person drunk at Nanny's funeral. I was out partying with the nurse's the night before

I slipped over on the dancefloor and bust my knee - couldn't kneel at all. I had to pretend, hovering on my good knee. I'd have brought shame on the family otherwise. I also had to run and puke while cutting fat off the "good" ham for funeral sandwiches.

Still, I was pissed as a fart the night she died too. Mum got me up out of bed to kiss her goodbye... I only cried because I was booze-sodden and tired. Wicked grandchild that I was.

They're gonna have to bury this cat in a square coffin. That body position does not lend itself to your standard model.