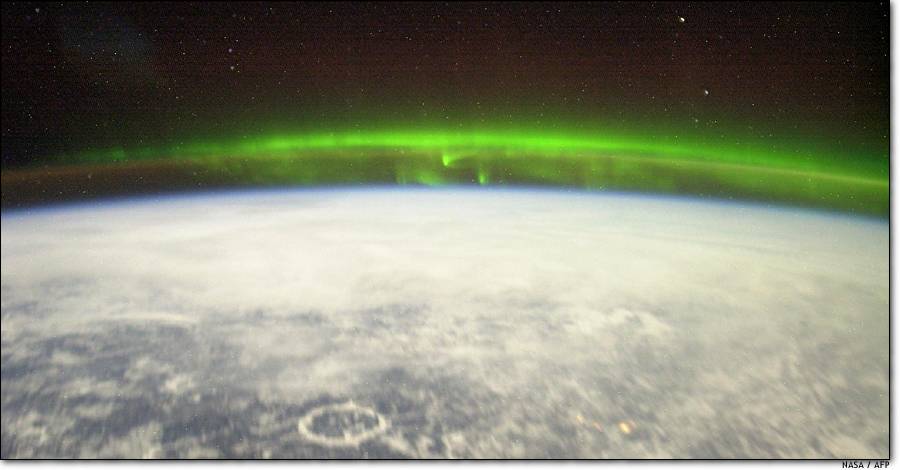 Not much to say about this, another NASA pic via MSNBC pic of the week. The green bits are aurora, but the most interesting thing to me is the round circle at the bottom. That's a crater, and it turns out to be such an important crater that it has a name: the Manicouagan Crater. It's in northern Canada, and it's one of the oldest impact craters known on the Earth, formed about 200 million years ago.

Oh c'mon, you honestly don't believe all that "shimmer" stuff, do you?

That's obviously a picture of our new planetary force shield, designed to protect us against the invading alien hordes.

Damn gov't coverups can fool everybody... except ME!

Another damn fine pic, UT. How do you find all these? And I even *try* to stay up to the minute on science and astro stuff...

Manicouagan is rare because plate tectonics tend to consume impact scars on Earth. Manicouagan is a big lake (the perimeter, anyway...the center is uplifted as a result of the impact rebound forces), I believe, and wasn't even recognized as an impact crater until relatively recently, like a couple of decades or so back, because it is so damn big.

For some reason, your IOTDs today are bringing up geological stuff I've read and stored away in the Trivial pursuit portion of my brain...

It's my job, sir! Coming this week will be Yet Another astro image that will blow yer mind. It blew mine.

I have to reveal the truth - Undertoad has geology genes...

Bitman  Monday Mar 31 11:13 PM
Quote:
You're not far off .. the Earth really does have an electromagnetic shield protecting the atmosphere. It's only good for deflecting 'wind' from the Sun, but it's there.

All in all, solar radiation is probably a lot more deadly to us than attack from an alien species, if you average it out over millions of years.

we don't need an energy shield...

The ring of <a href="http://www.space.com/spacewatch/space_junk_list.html">garbage</a>[space.com] that we've left up there keeps us plenty protected from unwanted aliens. And endangers our space men every time they walk.