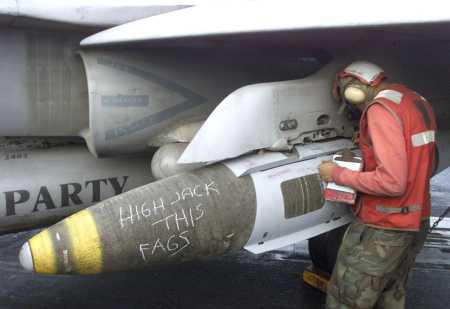 In these troubled times it is good to know that the US has stood up to show the world that it is a shining beacon of tolerance.

This picture is all over the place, and I think as many people agree with it's sentiment as disagree.

(I mean, the muslims who will be killed by that missle are clearly homosexuals, after all...)

anyone know why it says "party" on the plane?

here are a few other images I have collected over the past few days from ehowa.com

Maybe the missle is filled with cigarettes and the young enlisted gentleman wishes to help his comrades kick their habits by suggesting that the smokes be rerouted? Luring the terrorists into action.

Why it says "party" - it actually says "war party" and the "war" is cropped.

The next question "Why does it say 'war party?'" I have no idea.

I can't imagine why there's so little tolerance of gays in the military. You'd think the official policy of cashiering them when they're discovered implied disapproval, or something.

If he knew that the *Taliban's* method of dealing with queers is to line them up against a tall stone wall and push the wall over on them, perhaps the ordnanceman who loaded that particular item might have chosen a different slogan.

What I want to know is how a person who can't spell "hijack" found his way into a job loading munitions on an aircraft carrier. Can he read? Is that even the type of bomb he was supposed to load?

The US military is still homophobic. Lots of gays who were "other than honorably discharged" have tried to re-up, thinking that the official stance might be different in wartime.

No luck, story is here:
http://www.newsday.com/news/nationwo...ld%2Dheadlines

Hey they're gays but they're AMERICAN gays and right now America needs all the help it can get.

These don't look real to me. Anyone can fire up photoshop and draw words on a bomb.

Hmm, does it matter though? Photoshoped or written on the bomb itself the message is the same...

I wish I could make the claim that the term was used becuase of how these fantacis would feel about being called such. But I don't think anyone, including me, would buy it.

Oh well, just one more hang-up we have to get over.

MaggieL  Wednesday Oct 17 08:18 AM
Quote:
Not exactly. A message from someone with a bomb carries a different weight than one from someone armed only with Photoshop.

Sorry, I was unclear. I meant that the bombs function was unchaged (it will be used exactly the same way with or without writing) and the photo's popularity isn't dependant on this being real. I've seen the pic of the stealth with an amusing statement on the underside of the wings all over the web and it's obviously fake.
The bomb will fall, and we'll chuckle or be offended by the bomb quote's regardless.

But in this case it's an AP photo, which means that the chance of it being faked is damn near zero.

Quote:
You're right. The media never wants to make the military look bad. The media have been the perfect picture of fairness and honesty when it comes to things they don't like.

I served in the military. This wouldn't have been permitted by my superiors, especially if they knew someone would be around with a camera.

Quote:
You're absolutely right, Paxton. It's worth at least a field-grade Article 15 if they ever catch the fool who wrote it, possibly even a court-martial for "Conduct Unbecoming" and "Failure to Obey a Direct and Lawful Order".

Despite what many may believe, this sort of thing is not tolerated in today's military.

By "this sort of thing" so you mean hate messages specifically, or writing on bombs in general?

I've seen several other pictures of messages scrawled on bombs recently. I guess they could all be photoshop work, but I thought they were real.

Yes, that's a word. I invented it and just as soon as the Board of Wordology approves it, I'll get credit and royalties. Right after I die.


Anyway, speaking as our (I think only) active duty member, the US Navy allows messages to be scrawled on bombs and missiles by the ordnancemen since it does not impair the weapons' function and improves morale. This position is a tradition that dates back to WWII and many photographs can be found of blockbuster bombs with messages to the enemy written on them.

I have no information on the other services policies, but it would seem to me that they also allow this since they all do things pretty much the same way.

My apologies. I was a little vague before. I was referring to the anti-homosexual remark, not the time-honored tradition of scribbling on ordnance.

As far as the "fag" slur goes... the luckless ordnanceman was who wrote it is probably wishing he hadn't. This thing has gotten a lot of press coverage. I would imagine that everybody in his unit is busy covering their asses right now, in anticipation of the inevitable witch hunt.

Somebody's gonna get sucked into the blades for this one. Command guidance for dealing with "hate crimes" is clear, and local commanders are given very little discretion when it comes to dealing with such things. Another career ruined by a momentary lapse of judgement.

why does the freaking media always have to blow things out of proportion?

But sweeps is two weeks away...I'm curious to see what they're going to do this year.