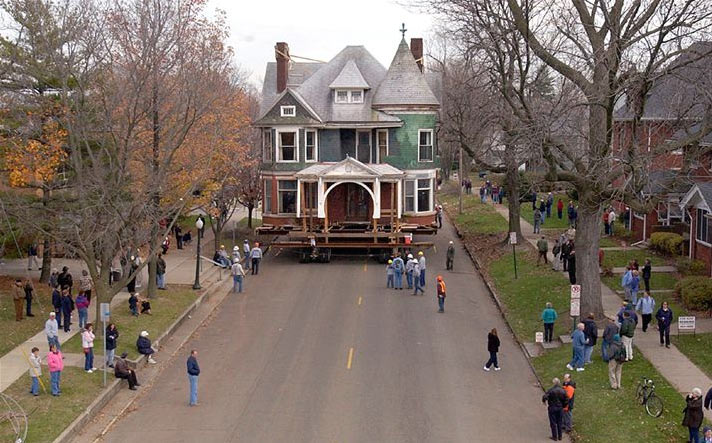 Bloomington Illinois had this historic house, the Mandel-Cohn house, and it was located on a stretch of land that a particular church wanted to buy. So they just picked the house up and rolled it down Front Street to its new location.

I'm glad they didnt just smash it up. Its pretty.

A guy in Binghamton had a victorian he wanted to move unfortunately the power companies numbers for moving power lines was obscene. That put the kibash of a pretty good idea... I'm not sure if the place is toothpicks yet. I'm with tw we need to bury these ugly cables for lots of reasons.

Everybody on my school bus understood that if you put your hand out the window, it could be sheared off by accident.

Is it just me, or does it not look like it's going to fit between those trees?

I'm with you warch, I'm glad they didn't just take the easy way out like most people would these days, and demolish it. It's a very pretty house and worth saving.

It would be great if they banned above ground utilities.Not only are they dangerous, but they are downright unsightly.
I know you all remember the IOTD a couple months ago entitled "Hung Moose". I bet he would agree. ... If he weren't dead.
Next time I move (god forbid) I may consider this technique. Wouldn't that be cool. Just sit on the sofa and wait till you get to your new locale. Oh, wait! I would have to unplug my desktop. Always a catch!
Very nice house. I appreciate those folks for preserving it. You can't get that type of house built these days. If it were built recently it would fall to peices en route.
I always wondered how they kept the chimneys from collapsing. Now I know. Thank you.

For the last couple of years every house I've seen or heard about being moved was because a church wanted the land.

xoxoxoBruce  Tuesday Nov 23 07:42 PM
Quote:
Notice the limbs have been trimmed. In the foreground the tree on the left has been trimmed just a little because there's none on the right. Slalom.

c'mon, you were ALL thinking of that song.

I'm still looking for the "two cats in the yard"

jinx  Tuesday Nov 23 08:21 PM
Quote:
They moved that stone one in the intersection in front of King of Prussia mall a few years ago to put more 202 down. That was pretty cool...


A church would definitely not fit there. (bottom right)

observer  Tuesday Nov 23 08:44 PM
Quote:
I'm going out on a limb here, but I think it's already been through the trees. No one would push something that big, they would pull it. I think the house is going away from the camera. Anyone that's attempted to backup with a trailer would know how hard it would be to push something like that in a straight line.

A close friend bought a house from the hospital for $1 and moved it a little over 1 mile. The story and details (including moving telephone and power lines) was quite interesting. Everyone had to have their piece of the action.

Even the foundation was put in about 6 inches too large meaning a new foundation was built under the house as house sat waiting overhead for its new 'feet'.

Because it was on county roads, it had to be fumigated so that rats did not run on county property. Fire Department had to have an engine in the procession in case house caught fire while in movement.

City demanded that Ashplund Tree service be part of the procession in case tree branches might be cracked.

Railroad demanded that flagmen be one mile each side of a bridge in case a train might pass through while house passed over RR on bridge.

Of course there were the expected members of that caravan including two police cars, county highway engineer, city tree surgeon, etc.

He says he made money. I am not so sure. Moving the house literally broke every water pipe. All sheetrock had to be removed and plumbing redone. When we tried to restore roof, the rafters were so destroyed in the removal that we had to put on a whole new roof. Then it rained for days. Oak flooring was fixed by wall to wall carpet.

A building has to be something special to move. But the contractor (Billy) who moved it was brother of the man who created Wiechart Realtors. Billy did it because he had never done anything like that before - and thought it would be fun. My friend did it to ... well everything he touches sooner or later always turned into gold. No one else would have done what he did. He was an amazing person.

My hometown in Illinois saw something similar about 10-15 years ago. it was one of the historic John Deere Family homes that sat on the property of their corporate headquarters. the company needed the land to put in another office building but didn't want to destroy the old home so they donated it. A new church about 4 miles up the road had to pay to move it, but they received a beautiful victorian home for their pastor to live in free of charge.

capnhowdy  Tuesday Nov 23 10:11 PM
Quote:
The cost for arranging this team of people to do the work: astronomical.
Moving a whole house to a different location safely & making it a home again:
PRICELESS

If I'm not mistaken, this is a "Queen Anne" style house, typified by the porch and the round turret.

Read a story some time back about how houses were moved in the last century or 2 in the USA. Sometimes it was done with one man and a mule and a bunch of logs as the rollers; could take a week or 2. I know of at least 2 old estate houses in downtown Houston where the house was just turned 90 degrees to face a different street that may have become a new main thourougfare. Hard to imagine now adays with slab foundations to turn a house just a quarter turn. Pier and Beam was the foundation of the time and it made it much easier to do.

Best to all as we head to the holidays

xoxoxoBruce  Wednesday Nov 24 02:26 AM
Quote:
Right, they moved the Rose Tree Inn on 252 in Delaware County and that light house in NC, also. But the private homes, that I've heard of, were all for churches.


Quote:
True.....welcome to the Cellar, observer.

wolf  Wednesday Nov 24 02:31 AM
Quote:
That was the King of Prussia Inn. Historic Building. Moving it was the only way they could save it.

This is a little late, but as one of the new owners of the house pictured above I couldn't help but post a reply.

First, it is a Queen Anne. It was built in 1894 for Oscar Mandel. It had been in the family ever since - until the church bought it. The church donated the house to the Old House Society who then sold it to us.

During the move I was singing "our house in the middle of the street". The neighbors made jokes about having a mobile home in the neighborhood.

As for the move itself - the house was moved onto dolleys that were self-propelled. So it was neither pushed nor pulled - it just moved down the street all by itself. The picture was taken with the house moving toward it. Several trees needed to be trimmed a little to make way for the house. The route went through a parking lot, into the street, down a block, through another parking lot, and onto our lot. The entire journey (about 2 blocks) took nearly 7 hours.

Thanks for the interest in the house and the support of our preservation efforts.

Did the masonry survived the trip ok?

Hey welcome to the Cellar and thanks for the info dp73.

Moving a house is one thing, moving a LIGHT house is a whole new game.

Most of the masonry is okay. The bricks hadn't been tuckpointed in forever, so we had a section that pulled away from the exterior wall (now being held in place by a brace) that will need to be fixed.

The lighthouse move is amazing. The Old House Society (who was responsible for the move) actually contacted Expert House Movers - who moved the lighthouse - for a bid on this project.