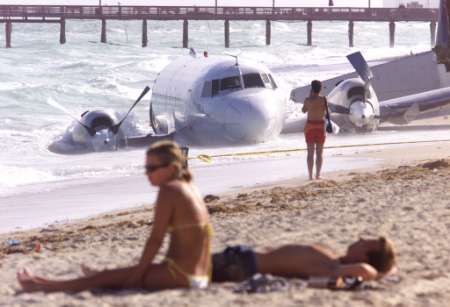 A few days ago, this plane crash-landed in Miami. The pilots walked away. I like crash images, but what really makes this shot is the bathers - nonchalantly enjoying the beach, seemingly unaware...

Either that, or they're trying to look inconspicuous while they plot to steal it.

I would honestly think that it would be a bigger draw than that - if I were there, I'd be over looking at it and whatnot. But you're right - they're just there, like nothing ever happened.

if you look closely at the picture, you can see that the plane has no tail fin attached, because it is laying a bit behind the plane off to the right of the picture.

just my first look at it

hey, she's kinda cute. anybody got her number?

heres my question--backpacker pointed out the the tail is sitting to the right of the plane, but why is it sitting straight up in the air? and so close to the plane in that position?

did it just break into two and fall straight to the ground? that might have been quit ride.

oh my god how sad

That was a very nice airplane, there's something disturbing about seeing laying there in the sea like that. You know it will never fly again.

It almost looks like it was once a living thing and now it's dead.

From an amateur's armchair view it appears the right propeller (left in this view) was not turning at the time of impact, the blades are not bent.

Anyone got a link to the story of this accident?

Well, as a pilot, even more than that, the right engine looks like the prop was feathered. Ususally done when the engine quits on a twin so that the prop has the minimum drag possible.

IOW, it looks like the problem at least STARTED with a right engine failure. They still should have been able to make it to an airport unless it was caused by something that soon thereafter affected the other engine -- like lack of fuel or something.

I'm going to surf and see if I can't find more on this forced landing (doesn't look bad enough to call it a crash).

Addendum: Found a link on Reuters at http://www.reuters.co.uk/news_articl...StoryID=439457